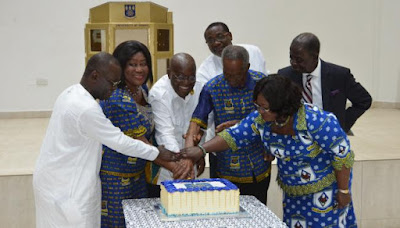 A Service of Thanksgiving to climax the University of Ghana’s 70th Anniversary Alumni Homecoming took place over the weekend, graced by the distinguished presence of alumnus Nana Addo Dankwa Akufo-Addo, President of the Republic.
In a brief message at the thanksgiving service, the President of the Republic said he was elated to join alumni worship to climax the University’s 70th Anniversary. He recalled the sacrifices made by cocoa farmers and other individuals which resulted in their establishment of the premier University. The President reiterated the fact that the University has produced three Presidents for the country which he said shows the impact the University has made to the country. He said the University’s alumni continue to excel in various fields of endeavour, and singled out the Chancellor of the University, Mrs. Mary Chinery-Hesse who he said has led a distinguished career of service at the national and international levels. He extended best wishes to the University on the occasion of the University’s 71st Anniversary
.
Using the Biblical story of feeding the multitudes, Prof. Joseph Osafo Adu who delivered the sermon, said the disciples of Jesus distributed what was given them and there was multiplication and enough to feed the multitudes. He said, in taking care of the multitudes, God also took care of their needs and there was more than enough for them after.  Prof. Osafo, who is Head of the Department of Psychology at the University of Ghana, added that “wherever we work, we have to see ourselves as serving the needs of people and our needs shall be served in return.” He advised all to eschew all forms of corrupt practices as corruption robs us all of sufficiency and abundance!
Professor Joseph Osafo Adu said in the midst of challenges, our attitudes as members of the university community, and also as Ghanaians, would determine the altitude we can get to, and posited that challenges provide opportunities for growth.  He maintained that as a university and as a nation, moments of distress should lead us into a time of reflection to generate ideas to address the problems.  One way of doing this, he said, is to be grateful, adding that gratitude draws one’s attention to what one has and distracts one from the cycle of ruminating on petty difficulties!   He said a lot is gained from being optimistic in hard times rather than being pessimistic.
On obligations as leaders and employees, Prof. Osafo said we  all hold positions in trust, and he urged all to be willing to serve others as this act meets God’s requirements of justice and love.
Earlier Rev. Professor Patrick Ayeh-Kumi, in recognizing the principal officers of the University, government officials and other dignitaries, singled out the President of the Republic for special mention.  He thanked him for honouring the University with his presence.
Other officiating clergy were Rev. Dr. Charles Antwi-Bosiako, Member of the Chaplaincy Board and Head of the Department of Physiology; Lady Pastor Grace Fleischer, Principal Administrative Assistant, School of Graduate Studies, who led the liturgy and prayers of dedication of offertory and thanksgiving respectively. Special prayers were offered by Ms. Esther  Prah, a level 200 student and Mrs. Stella A. Amoa, Director of Public Affairs representing the student body and employees respectively.  The Scripture readings were done by Mr. Kwaku Mensa-Bonsu, former Chairman of the UG Alumni Association and Ms. Doris Ansah, President of the Volta Hall Alumnae Association.
All three choirs present, Winneba Youth Choir, Humble Band (composed of visually challenged members), and University of Ghana Jubilee Choir (led Dr. B. Amakye-Boateng),  displayed their choral mastery, rendering an exciting blend of repertoire in both English and local languages. The Praise Session was led by Minister Bernard Twumasi.
An Anniversary Cake donated by the MP for Ayawaso West Wuogon, Hon. Lydia Seyram Alhassan was cut by the President of the Republic, assisted by Madam Chancellor, Mrs. Mary Chinery-Hesse, Prof. Yaw Twumasi, Chairman of University Council, Prof. Ebenezer Oduro Owusu, Vice-Chancellor, Chief of Staff, Mrs. Frema Osei-Opare and Dr. Benoni Bondzie-Simpson, one of the 1948 matriculants of the University.
Please Click here for more pictures of the thanksgiving service

Is it a sin to have a Crush?

Christian Guys: This is what Christian girls want

Dunsin Oyekan out with a new single titled “ROAR”

Dunsin Oyekan out with a new single titled “ROAR”

July 6, 2021
Need Help? Chat with us
Start a Conversation
Hi! Click one of our member below to chat on Whatsapp
The team typically replies in a few minutes.
Joseph Larnort
Support Assistant